This year’s Copenhagen photo project didn’t involve any headless aliens. It was instead, all about a red bicycle.

Georg(e) is his name, and he was waiting for me when I arrived in Copenhagen on the 1st of July. George is the color of Dannebrog, the Danish flag, and he has carried all the men in Flemming‘s family at one point or another throughout his 20-odd years.

Flemming’s younger brother brought Georg(e) home in his early teens, rode around for a few years, but left it with their father after he moved on to something motorized. Flemming’s Dad changed the gears out many years later and rode it around on a daily basis for a while.

Earlier this year, Flemming found Georg(e) in his Dad’s garage in Jutland, brought him back to Copenhagen, changed the handlebars from the original curved racing type to the flat ones in the picture, found matching red pedals, changed the seat, gave Georg(e) a service, and gave him to me.

He’s been 20 years in the making by all the Jensen men, and is a silky smooth ride even after all this time. I christened him Georg(e) for another famous Danish Jensen.

Thing is, Georg(e) is from Jutland, and he’s never been to Copenhagen. So we thought we’d take Georg(e) on a tour of the capital and show him the sights.

First stop, one of the most famous Danes around – the Little Mermaid: 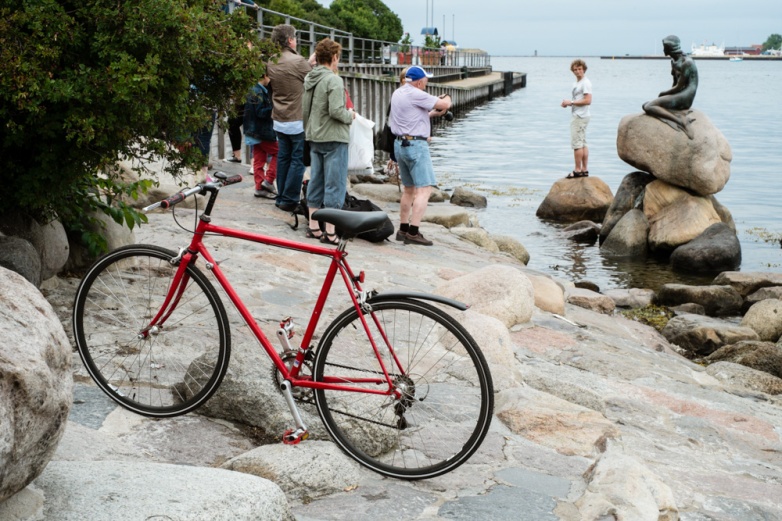 Then because it was down the road, he had to see Amalienborg, home of the royal family, and notably, the Australian connection in this whole affair, Crown Princess Mary.

Sadly, the royal family wasn’t around to introduce themselves, so we moved on to Gefion Fountain, which among other things, is also a wishing well. 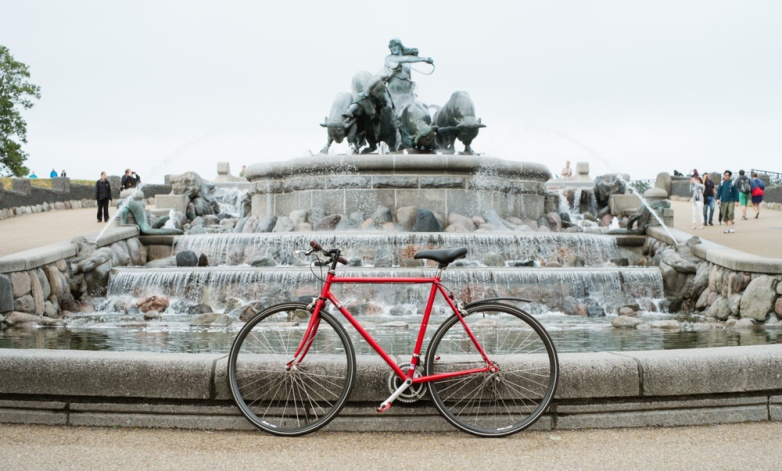 Here, Georg(e) considered chucking a cog in the fountain for a wish, but remembered that cogs cost money, so he erred on the side of his thrifty Jutland nature, and didn’t.

He wasn’t particularly impressed with the Opera House.

No trip to Copenhagen would be complete without a visit to Nyhavn, Denmark’s international tourist poster child.

Then Rosenborg castle, the first castle I’d ever seen, back in 2013. I was wigged out by the fact that people lounged around and drank wine in a garden without much regard for the fact that there was a castle built in the 1600s, right there.

I am a fan of the fantasy genre. I get a bit excited about castles.

Georg(e) took Rosenborg in stride though. 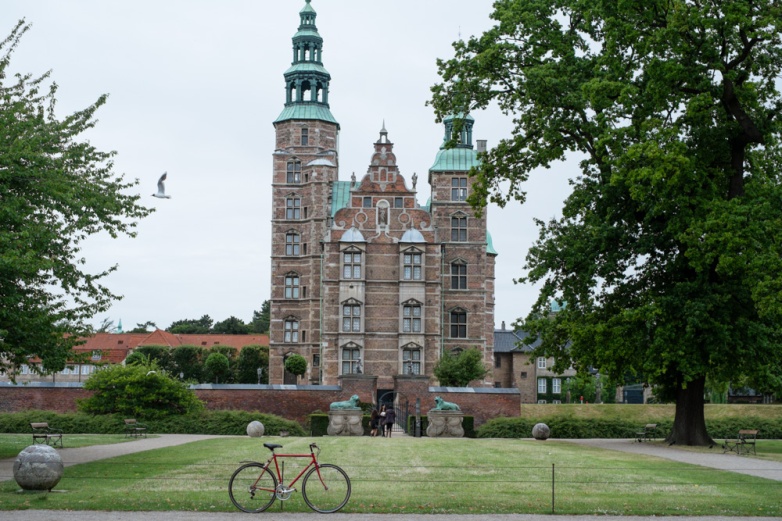 “Hmmm,” he snicked. “We have buildings just as old in the country, with less people in it.”

At this point in the tour, he got hungry from all the exertion, and went to check out the menu at Noma…

…then discovered that award winning Nordic cuisine comes with a price tag that is unimaginable in Jutland.

He was traumatised and wheeled away as quickly as he could, pausing out of breath, against a window, with artifacts that reminded him of a strange alien he’d met at some point in his travels:

Travelling on, he found other strange creatures who proved very friendly: 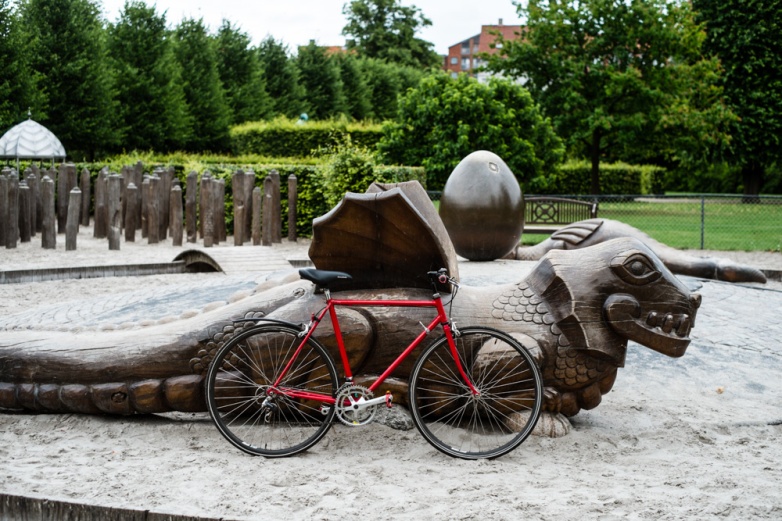 Thus encouraged by the approachability of the locals, he wandered over to the popular summer hang out that is Hipster Bridge, hoping to make some friends.

but it appeared that the feeling was not mutual. 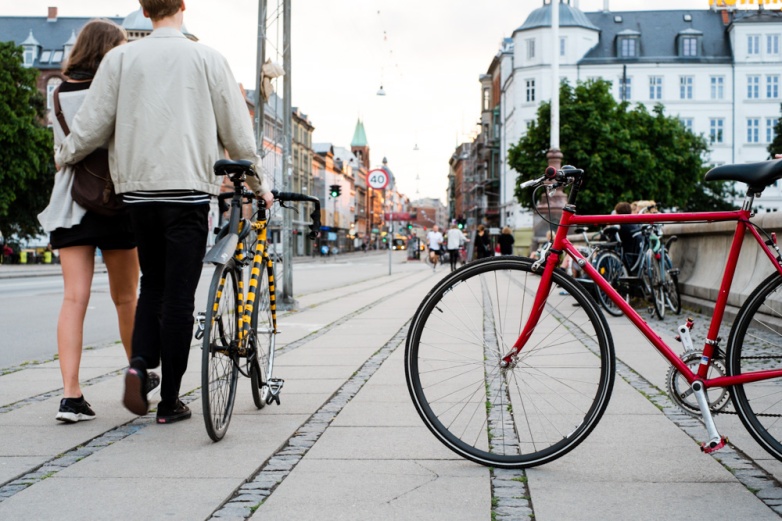 Georg(e) sighed, momentarily rejected. But being a philosophical sort, he concluded that you can’t win ’em all.

And so he turned to heavy metal, and found a whole community with which to bond. 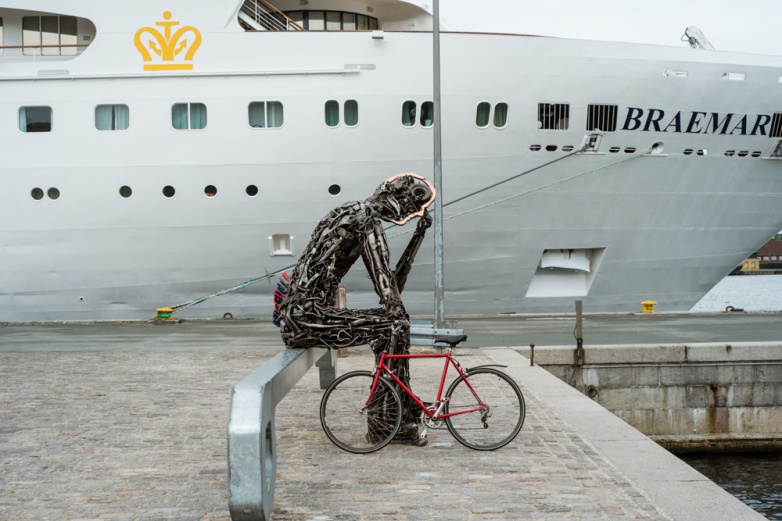 We hope you’ve enjoyed the adventures of Georg(e) as much as he had.

Well, being a creature of comfortable, clement weather, he’s going into hibernation for the long, frigid Nordic winter. He’ll come out to play again next summer, when the sun is shining, the weather fine, and his gears unfrozen.